Gunman Taco Truck is an action-packed drive across the post-apocalyptic United States to reach the safe haven of Winnipeg, Canada, where there are no taco trucks and your family’s taco business can thrive. Getting to the safe towns is hectic but your truck is armed with weapons that blast mutants into taco fillings. In the towns, you serve up the mutant scraps to struggling survivors who are more picky than they should be. Use money earned and scrap metal found to upgrade your truck and buy gas and supplies for the trip to the next town.

Donovan came up with the idea while we were having a coding lesson in the summer of 2014. Later in the day he pitched the idea to Brenda and I. Brenda filmed his pitch, put it on Facebook, and all our friends agreed the game idea was great. We decided to make it a family-created game and spent the next couple years working on it in our spare time.

Corona is the environment we used to make the game – it does EVERYTHING for us. We love the product so much. The API makes sense, was designed with simplicity in mind, and was logically planned. With its plugin architecture it can be extended to do anything.

We haven’t really hit any speed limits or memory limits with Corona, which was surprising. iPhones have fast GPUs and lots of memory so games just run very smoothly using Corona, which is well-written in the first place. We are very happy with the game’s performance on all platforms thanks to Corona.

We’ve been making games for decades so it took mere hours to get used to Corona. You don’t need to learn a huge IDE like Visual Studio or Unity, so if you know how your code editor works you’re basically done. Using Corona is effortless. I’d say it takes about 1/8th the time to make a game using Corona because of the highly iterative nature of using Lua. 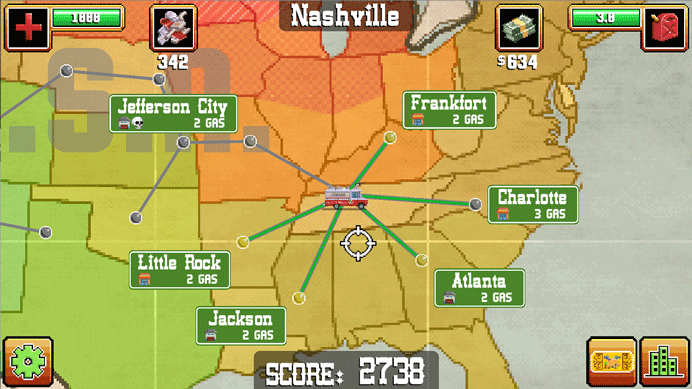 Your App Has Been Featured

It was a HUGE surprise to see Gunman Taco Truck on all iOS App Stores under “Games We Love” for a week. It was just amazing. And that was with no contact with Apple – they just chose it on their own. We were very happy about that.

I think it was featured because people were talking about it, YouTube Let’s Plays were coming out at a rapid clip, and it was a very different game that didn’t fall into the current mobile design mold. If it wasn’t a fun game it would not have featured, so making sure it was really fun and challenging was super important. 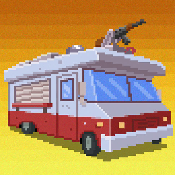 “ ... it took mere hours to get used to Corona.
You don’t need to learn a huge IDE like Visual
Studio or Unity, so if you know how your code
editor works you’re basically done. Using Corona
is effortless. I’d say it takes about 1/8th the time
to make a game using Corona because of the
highly iterative nature of using Lua. ”

The art style is very distinctive and the audio is top-notch. Design-wise, the game gives the player multiple modes of play that are all very different: strategic map, time-based taco making (memorization), shopping, and intense skill-based highway combat. These four gameplay modes all interweave to present a fun but complex puzzle to solve. The goal is the same every game but the way to get to the goal changes every game so it’s always a new challenge.

It’s very casual and easy – basically I just come up with ideas and start planning how they will work. Then I start making it happen. That could be contacting people to do various parts of it or I just start making stuff on my own. It depends on the size of the game. I used to write in notebooks a lot but that was mostly because I was using a computer that only did one thing at a time, or I was in school and not in front of a computer. Nowadays I don’t write in notebooks but I should because I like having those written records and drawings around. 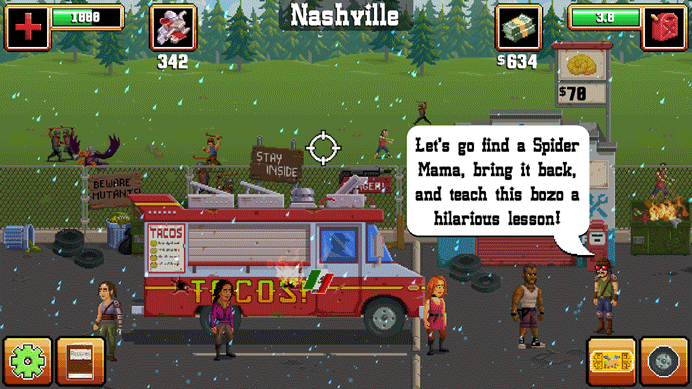 For iOS, having a free game is highly important for getting downloads. So that means we have to monetize through in-app purchases. The game has so many great items that it was easy to devise various packs for players to buy and keep permanently. Then we introduced a consumable economy to help players get the things they want so they can get closer to the goal easier. Finally, we put video ads as a reward in the game – if you watch an ad you can get 2 Tocco’s Tickets that can be used to buy stuff. We might add even more options in the game with a new update.

I think it has succeeded. People don’t have a barrier to entry and if they get hooked they have lots of options for buying permanent or temporary rewards. I think it’s a pretty great mix.