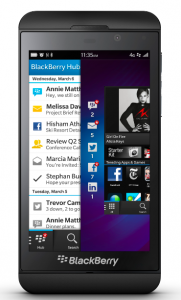 This could be the year for RIM’s rebirth. The previously struggling company made a splash with Tuesday’s announcements: they’re rebranding the company name to “BlackBerry,” hiring Alicia Keys as the new Global Creative Director, unveiling the BlackBerry 10 operating system, and announcing two new phones: the BlackBerry Z10, a touchscreen smartphone, and the Q10, a smartphone with a physical keyboard.

BlackBerry’s bold attempt to compete in the smartphone market could make consumers and competitors take a second look. The BlackBerry Z10 features a 4.2 inch screen, unique predictive text capabilities that adapt to writing patterns, app essentials (including video, messaging, Facebook, Twitter and more), innovative software design, and a time shift camera that allows users to capture their “best” face. On the performance front, the dual-core processor with 2GB memory makes this the fastest BlackBerry to date.

Considering BlackBerry’s reinvention, how do you think the company will fare against the competition in 2013?