Found: The Most Interesting Developers in the Universe!

Found: The Most Interesting Developers in the Universe! 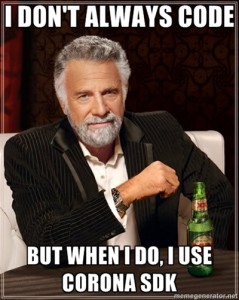 On April 1, Walter announced a new initiative here at Corona Labs. We were on the hunt for the most interesting developer in the universe. As the applications poured in, we discovered not just one, but three, fascinating developers in the Corona-sphere!

One such developer, Jason Schroeder, was onto us. He wrote in:

“I knew that this was an April Fool’s Day joke but I am submitting anyways, because I’m so darn interesting that I will turn your joke into a real contest through the sheer magnitude of my interestingness.”

Ok, so not everyone was fooled, but we’d still like to share a few of our favorite submissions. We were equally impressed by Daniel Williams’ entry:

“I’m the digital Chuck Norris. When I start to code, the keys type themselves.”

Based on the submissions, we see that we have a number of impressive friends in the Corona community! We’ll be awarding the top three submissions (those listed above) with a 3 month Corona SDK Pro license. For all who entered, we’ll be adding an extra free month to your Corona subscription as well.

Thanks to those of you who played along and shared your creativity with us!