Christof Wegmann is founder and CTO of Exit Games, provider of Photon Cloud, the #1 service for cross-platform real-time multiplayer game development. Christof has 13+ years experience in providing services and platforms for mobile devices and founded Exit Games in 2004 with the goal of forming a leading company for multiplayer services.

Photon Cloud is a cross-platform network engine and software as a service (SaaS) for real-time multiplayer games and apps. Photon Cloud is the latest Corona Plugin partner is now available for all Corona SDK developers. For more information, please see the Photon Cloud plugin documentation. 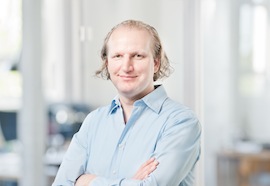 First, a little history about us: back in 2004, we started building multiplayer middleware and services for mobiles under the Exit Games brand. We recognized that there was an unsatisfied need in the industry — at the time it was very difficult to develop and launch a multiplayer game. We soon evolved from a pure mobile company and began to support non-mobile platforms, namely PC and Mac via browsers. At this time, we launched Photon Server, a cross-platform multiplayer socket server with a focus on real-time communication and unique features such as reliable UDP support.

Photon Server was a great success, powering a lot of browser-based games from companies such as Nival, Codemasters, Cmune, Bigpoint, Innogames and Warner Bros. Games. Yet, we were still convinced that multiplayer would become the standard for mobile games, just as it was for browser and console.

In February 2012 we launched Photon Cloud, with the goal of making cross-platform real-time multiplayer features available for all, from indie developers with a small budget to AAA studios with considerable resources.

To date, over 36,000 developers use Photon Cloud and now it’s your turn to get started. For information on integrating Photon Cloud into your Corona-powered apps, visit our documentation page. If you have any questions, please email developer@exitgames.com.