Occasionally a game comes along that is more than just pure entertainment. Sometimes a game tries to make physical fitness fun, sometimes it seeks to educate, and sometimes it strives for social impact. This week’s featured app, Candidate Crunch, looks to address these last two goals.

Candidate Crunch is developed by Urthworx, a NYC studio founded by Michael Fox. As a Columbia-trained entertainment lawyer, Michael has spent a decade producing impact entertainment. Along the way, he has also assembled a top notch team of former Disney and EA developers, artists, and designers. 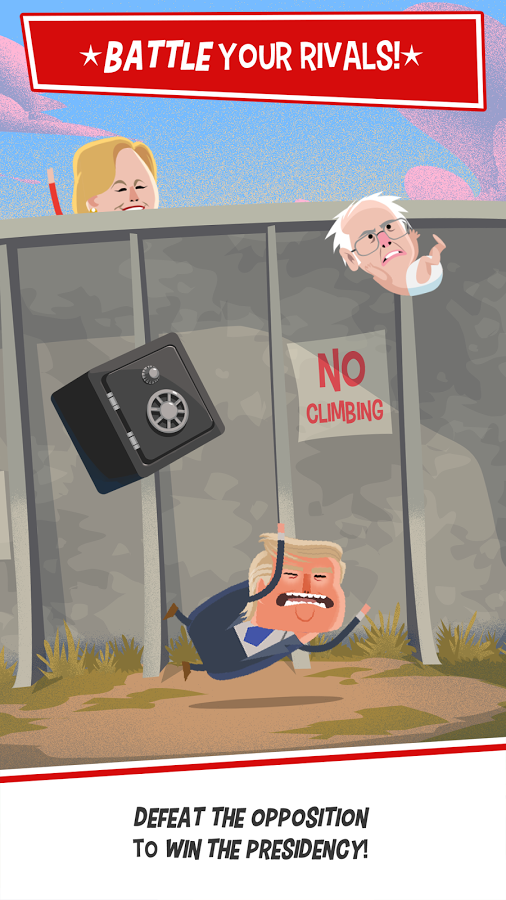 The goal of Candidate Crunch is to raise awareness around voting and drive participation in the electoral process, while at the same time raising funds for a worthy cause.

In partnership with DoSomething.org, a youth organization focused on social change, Urthworx is donating 10% of the proceeds from Candidate Crunch to their cause.

Candidate Crunch is also using Rock the Vote to power the in-game voter registration system, in an effort to ensure that everyone is ready to participate in the upcoming election.

Your goal in the game is simple: protect your favorite candidate while crunching the opponent. Tap and swipe to keep your candidate from being flattened by dangerous falling objects while catching things like babies and food. It may sound easy, but it’s really quite challenging.

To encourage civic engagement, the game includes trivia questions to help you learn more about the electoral process and its history. Earn coins that you can use for other in-game features, for example unlocking cards with interesting quotes, important info-graphics on candidate policies, and posters for your candidate. The game also includes Election Central, powered by Rock the Vote, where you can access everything you need to know to get registered and vote.

Players can learn more about the issues and understand where candidates stand. And, as the election gets close, Candidate Crunch will send push notifications reminding you of important dates and deadlines.

Candidate Crunch is available for free in the App Store and on Google Play, featuring in-app purchases to let you buy additional characters such as Super Donald and Cirque Du Hillary.