First, we would like to take this opportunity to let you know about a new tutorial on implementing advertising in your Corona apps. The tutorial covers code and common code to implement an ad plugin in your app. You can view it here!

A great question was asked in our Community Forums about using in-app purchases (IAP) to turn off advertising. It may seem like a simple idea but there is more to it.

When you sell your app for a fixed price, that person pays you once, ever. When you use ads, you get a continuous stream of income as long as your app or game is being used. If someone uses IAP to turn off ads, you get continuous income until they pay for the IAP, then you get the one-time fee and that’s it. For some apps, IAP subscriptions can provide ongoing income, but an app has to be pretty special, with lots of new content to convince users to continuously pay for it.

Let’s look at the financial considerations in answering this question. Let’s say that you end up setting the IAP fee to turn off ads at $0.99 (or an initial purchase price with no ads). Because the app stores take 30% of your sales, that means you will make $0.69 from that user when they make the purchase. But the question is: Will you make more from advertising?

Using Appodeal as an example and information from Appodeal’s E-Book “Monetizing Casual Games”, banner ads typically pay about $0.43 per thousand banner ads shown. To earn that same $0.69 from app sales, you need to display over 1,600 banner ads to your app user. Assuming your banner ads rotate every 45 seconds, it will take over 1,200 minutes or about 20 hours of view time to earn that same amount of money from the user. Note: eCPM values for the United States and Europe were averaged together from numbers in the e-Book.

Banner ads may not be the best way to implement ads. If you’re using other ad forms, like interstitials which pay an average of $4.59 per thousand ads, you need to show about 150 interstitial ads to earn the equivalent purchase income. Note, video interstitials pay more than static interstitial ads. Let’s say you can show 2 interstitial ads per session on average, the user only has to play about 75 times to make up that income. You don’t want to over-show ads to keep it from becoming an annoyance causing your user to just quit your app.

How do you get to that many ad displays? Most users tend to play a game a lot at first, then over time, they play less and less. All games have a usage “tail”. If you view this generic usage graph, it looks like a dinosaur: 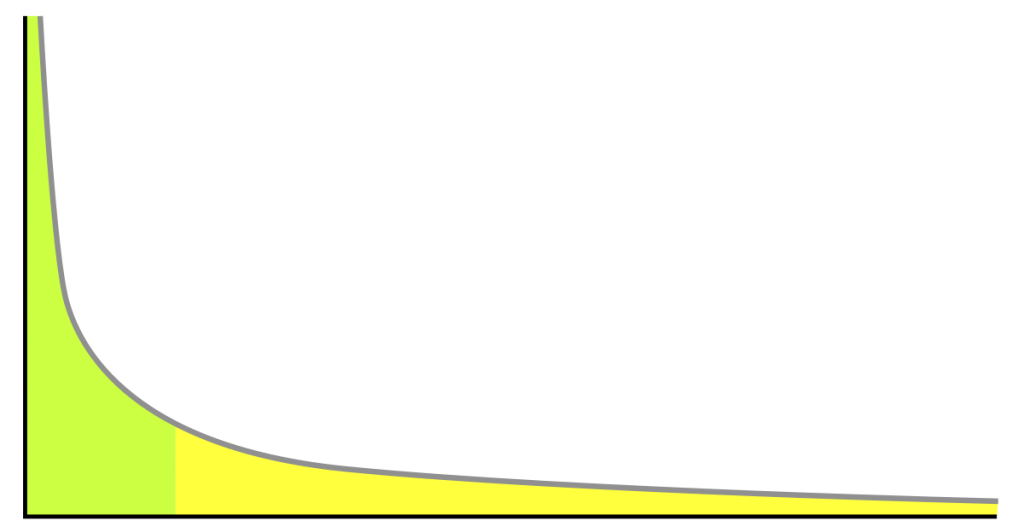 The left side is your initial usage spike (the head) and then as time passes it gets used less and less (the tail). Some games will have a long tail, but many will have a short tail. No one can really predict in advance how long your game’s tail will be. Successful apps will have a longer tail and a taller tail. It indicates that you are retaining users longer. Games and apps with a long tail will make more money from advertising. If your game doesn’t have any longevity to it, you want to convert them to paid as soon as possible.

This combination of retention and revenue is your game’s LTV or Lifetime Value.

If your game is too short, offering an option to disable ads won’t be effective because you won’t have any retention to motivate them to disable ads. If your ads are too annoying, people may get turned off to your app and give up on it early. You have to strike a proper balance between advertising and entertainment or utility value of your app.

Even short-lived apps can monetize successfully by …

Rewarded video is clearly the winner in the eCPM value for you, but you have to use them wisely. Rewarded video is the user volunteering their time in exchange for some in-game reward. You can’t just throw a rewarded video in front of a user automatically. That’s the job of an interstitial ad. If you force the user to watch an ad, even if you reward them, it’s still forcing them to watch the ad.

Consider they have played your level and lost. Your game logic shows them an ad and resets back to the beginning. That is an Interstitial ad placement. If you prompt them “Would you like to view an ad to continue to the next level?” and if they agree, you should show them the video and let them move on to the next level. If they choose no, simply take them back to the beginning, but don’t force them to watch the ad.

Rewarded ads encourage players to continue playing, either by not losing progress or by gaining some in-game feature which can extend your app’s LTV. Using these techniques, even games with shorter tails can be quite successful.

Every app is different. You should make the most entertaining game you can or the most useful business or utility app that brings real value to the user, then balance your advertising, in-app purchases and in-app currency to maximize your income.