Nick Nebelsky, Creative Director and CEO of Intense Media, LLC, always dreamed of owning his own media company and now it’s starting to take shape. He and his writing partner, Dr. Mike Perko, Phd., just finished a multi-state book signing event at 7 Costco Clubs in the AZ and NC metro areas. Their book, Cornered! which also is available as an app, deals with a sensitive issue that children are faced with today – bullying. The book looks at the issue through the eyes of Sheldon, a square-shelled turtle. 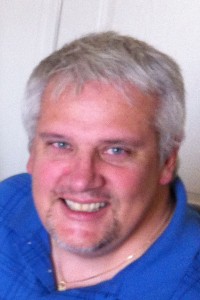 A former classmate of mine, Mike Perko, approached me with the idea of a square-shelled turtle named Sheldon who gets bullied in school. By this time, I had already created eight apps and felt comfortable that we could make this work. We’re both very passionate about kids’ well-being and that is the driving force behind every thing we do. I am heavily involved in programs in AZ such as RIF, NEA’s Dr. Seuss Day, Special Olympics and many others. Mike is a professor at the University of North Carolina at Greensboro in the Department of Public Health. His main goal is to educate the public on keeping kids safe. So I felt extremely blessed to be working with Mike.

Using Corona SDK, we built two apps in July and then in August of 2012. I created storyboards, mockups, developed my own sound effects using my iPhone, and created the look of Sheldon and all of the characters in the stories. Mike wrote the script and lent his voice, as well as his two children’s voices in the app version of the story. To date the apps have been downloaded thousands of times and we were even able to muster a few awards along the way. Sheldon’s Adventure and Sheldon’s Adventure: Cornered! was recognized as a Top 10 app by SmartAppsForKids.com and was selected as a Top Pick by Barnes and Noble. Both have risen to #22 and #23 on the books list for daily downloads.

In late October of 2012, Mike asked me if we could turn the apps into a paperback and/or hardcover book. The trends were all going in the opposite direction. With millions of iPads and iPhones out there, I thought why on earth would I go that way? Mike reassured me that my work would not go unnoticed and that we could reach more children if we had a printed version of the book.

Apps and printed books are two different animals when it comes to publishing and each has its own set of headaches and rewards. I had to figure out how I was going to print the book. I knew that I didn’t want to carry a large inventory because of the huge financial burden. Next I had to consider distribution, editing, proofing, ISBN, and book marketing. Different decisions needed to be made for printed books. I don’t believe app developers realize how nice it is that Apple handles worldwide distribution. In paper book printing, you need to find and apply to a distributor and they take a percentage of your sales.

In early 2013, I was able to knock out two books at the same time which was a pretty incredible feat. Mike immediately sprang into action and secured a book signing at a local Barnes and Noble which turned into our first large book order. And he was also instrumental in securing a deal with Costco and we had our first signing event at the Greensboro Costco in North Carolina early shortly thereafter. A couple of weeks later, I approached Costco HQ and asked them if we could do more Costco signings in October because it was National Bully Awareness Month and since Mike and I lived in two different states, we wanted to have events in AZ and NC. Costco asked me to put together a “wish list” of stores and I asked them for “pointers” on how to get into all 440 Costco Clubs. At that point, the buyer approved the signings on our wish list and emailed me an excel file of the entire store database. Mike and I have never looked back.

It’s remarkable what you can accomplish when you just ask for something and when you surround yourself with amazing people. We have some really cool products coming out in the next few months and like Apple, I’m going to let the rumors fly on what they are. Until then, our apps are available in the Apple App Store, NOOK Apps, and the Amazon Appstore. Our paper book books are carried on Amazon.com, BN.com, and brick and mortar stores including Barnes and Noble, Changing Hands in Tempe, AZ and Costco Clubs. Our goal is to reach as many kids as possible with the Sheldon’s story.

This project wouldn’t have become a success without a few important people. Walter Luh, David Rangel, and Charles McKeever at Corona Labs have been uber helpful in my app devleopment journey. Alex Souza, the creator of Kwik, helped me create the second book app, Mike Perko lifted me up and helped me see the light at the end of the tunnel, Rob Kubasko of Iguana, Inc. provided stellar marketing design and of course I want to thank my beautiful wife for her love and dedication to our family and this project. All these people helped me realize that nothing should ever get in the way of a dream.