Alex Souza is the founder of Kwiksher, creator of Kwik, a plugin that writes Corona apps directly from Photoshop.

With Corona announcing support of native particle effects, it was natural to extend Kwik and enable it to import the JSON format. This new feature, called Particle Replacement, allows designers to easily replace Photoshop layer contents with external designs from tools like Particle Designer 2 (PD2).

However, with hundreds of users willing to stay in Photoshop while creating and editing particles, I decided to create a tool specifically to manage particles. It is called Kaboom, the first “plugin” for the Kwik “plugin”!

Kaboom can edit PD2 JSON files but also create new particle designs, directly from Photoshop’s interface. Users are able to control many parameters, including color, sizes and images, offering also a live preview. When perfected, the particle file is added into Kwik’s workflow, with a single click of a button. 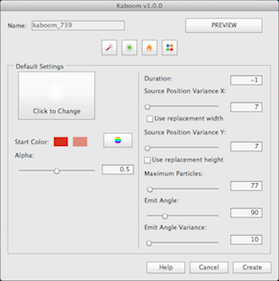 Greg Pugh, who has been beta testing Kaboom, created a nice tutorial on how to create a campfire scene using the Kaboom plugin.

To celebrate its announcement, Kaboom is available for purchase right now with an introductory price of $29.99 until July 13th, 2014 (regular price is $49.99) or when the next Corona public build is available – whatever comes later.

Kwik has been used to create more than 600 storybooks and games and I am curious to see what people will do now with the ability of creating native particle systems with Kaboom!

Editor’s note: Alex was on today’s Corona Geek show talking about Kaboom and Greg Pugh (Corona Ambassador) showed off an example. Check it out here.