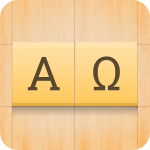 As a programmer, spelling isn’t my greatest strength, but I’m one of those people who can look at a jumbled-up word and actually read it. In fact, many people can decipher words as long as the first and last letters are correct and it’s the proper length.

For example, can you read this?

“it deosn’t mttaer in waht oredr the ltteers in a wrod are, the olny iprmoatnt tihng is taht the frist and lsat ltteer be in the rghit pclae.“

What started as an urban legend and Internet meme seems to actually have some facts and a term behind it: typoglycemia.

Leave it to an enterprising game shop to turn this phenomenon into a compelling game. BorderLeap, a small studio founded by Nate Dicken, took this concept and put together Alpha Omega. Originally released for the “small screen” in April 2014, BorderLeap recently released the game for OS X desktop.

Since then, Alpha Omega has reached the #1 featured position across 150+ countries. It has also been the #1 paid “Puzzle” and #1 paid “Word” game, and it currently boasts accolades as the #2 overall paid game and #3 grossing game in the Mac App Store. As if that’s not enough, Apple featured Alpha Omega with a large banner in the “Word” game subcategory and also featured it in the “All Time Greats” in the same category.

Want to see what the buzz is all about and test your skills at unscrambling jumbled words? Alpha Omega is available for iOS, Google Play, and OS X.

What kind of success can you achieve? Download Corona SDK and get started today!